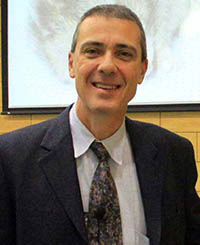 Dr. Vittorio Capello graduated in 1989 from the School of Veterinary Medicine of the University of Milano, Italy. He has practiced exotic animal medicine exclusively since 1996, and provides professional services for two veterinary clinics in Milano. Dr. Capello's focus is the medicine and surgery of exotic companion mammals.

Dr. Capello has lectured, published and taught exotic animal courses and practical laboratories throughout Italy, US, and other parts of the world.

He is author of the Rabbit and Rodent Dentistry Handbook, the Clinical Radiology of Exotic Companion Mammals and the Ear Surgery of Pet Rabbits dynamic eBook, and has both written and served as guest editor for numerous publications, including The Veterinary Clinics of North America-Exotic Animal Practice (Disorders of the Oral Cavity).

He served as board member and president elect for the Association of Exotic Mammal Veterinarians (AEMV). Dr. Capello is a founding Diplomate of the European College of Zoological Medicine (Small Mammal), and Diplomate of the American Board of Veterinary Practitioners (Exotic Companion Mammals).

He has been the recipient of the Oxbow award in 2010.

Dr. Elisabetta Mancinelli graduated from the University of Naples “Federico II”, Italy, in 2002.

In 2007, she moved to the UK where she initially worked in private practice and wildlife charities.

In 2009, Elisabetta started the first European College of Zoological Medicine (ECZM) Residency in Small Mammal Medicine, which she completed at The Royal (Dick) School of Veterinary Studies, Edinburgh. From September 2010, she holds the RCVS Certificate in Zoological Medicine. In 2014, she obtained the ECZM-Small Mammal Medicine and Surgery board. Dr. Mancinelli is co-author of the Ear Surgery of Pet Rabbits dynamic eBook, and has published both editor-reviewed and peer-reviewed articles. She is currently chair of the ECZM-Small Mammal sub-specialty and works at Valley Exotics, Cardiff, UK. 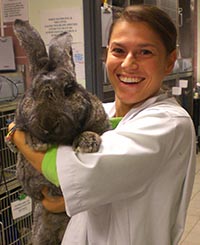 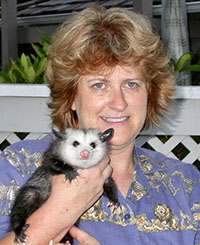 Dr. Cathy Johnson-Delaney practiced avian and exotic animal medicine in the greater Puget Sound area of Washington State for over 30 years, retiring from clinical practice in 2013. She volunteers with the Washington Ferret Rescue & Shelter, which she has been involved with since its inception in 1997. Currently she is working with a pet breeding facility developing disease-free small mammals and reptiles for the pet trade, with emphasis on Syrian hamsters and bearded dragons. Cathy is a consulting veterinarian for the Oregon Tiger Sanctuary and the Pacific Primate Sanctuary. She also serves as secretary-treasurer-webmaster for the Association of Northwest Avian & Exotic Veterinarians. Dr. Johnson-Delaney was board certified in avian and exotic companion animal medicine and she has helped to advance the fields of exotic animal and laboratory animal medicine. She has served as President of both the Association of Avian Veterinarians and the Association of Exotic Mammal Veterinarians. Cathy was named the 2009 recipient of the Oxbow Exotic Mammal Health Award and the 2003 Exotic DVM of the Year. Cathy has presented internationally on all aspects of non-traditional companion animals and she has also written extensively on related topics, serving as co-editor of the BSAVA Manual of Exotic Pets. She is the principal author and editor of the 2017 textbook Ferret Medicine & Surgery.

Dr. Angela Lennox is a graduate of Purdue University School of Veterinary Medicine, and has practiced avian and exotic animal medicine exclusively since 1991.

She is the owner of the Avian and Exotic Animal Clinic of Indianapolis.

Dr. Lennox was awarded board certification in avian and exotic companion medicine by the American Board of Veterinary Practitioners, and Small mammal medicine by the European College of Zoological Medicine. 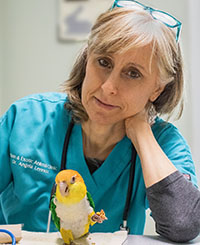 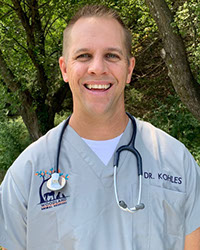 Dr. Micah Kohles, DVM, MPA, earned his DVM from Kansas State University in 2001 and a Master’s Degree in Public Administration from the University of Nebraska-Omaha in 2010. Dr. Kohles joined Oxbow Animal Health as VP of Technical Services and Research in 2006. Additionally, he owns and actively practices at Woodland Animal Hospital and serves as an adjunct professor appointment at the University of Nebraska School of Veterinary Medicine and Biomedical Sciences. Dr. Kohles is a frequent lecturer at veterinary schools and conferences domestically and internationally and was VMX Veterinary Conference Exotics speaker of the year in 2020. He is an active member of many professional organizations and serves World Pet Association Board of Directors, chair of the Nebraska Board of Veterinary Medicine and Surgery and previously was president of the Association of Exotic Mammal Veterinarians and served on the boards of the Nebraska Veterinary Medical Association and the Lincoln Children’s Zoo. Most importantly he enjoys spending time with his wife Ashley, daughter Taiya, and two boys, Tegan and Kai.

Dr. Melissa Kling graduated from the University of Georgia, Athens, Georgia in 1983.  Her career has been centered around exotic animal medicine and surgery.  She served as medical editor of Exotic DVM Magazine from 2007-2010.  Dr. Kling held the office of Secretary for the Association of Exotic Mammal Veterinarians from 2004-2014, the position of Executive Director from 2010-2013, and is currently their Treasurer. She is the Animal Care Facility Director at the Mercer University School of Medicine and Attending Veterinarian for the Mercer University Macon campus and continues to see patients in private practice.

Dr. Melissa Kling will introduce the course and the speakers on Friday September 17th.

The format of the Dentistry and Orofacial Surgery of Exotic Companion Mammals course is a copyright of Vittorio Capello, DVM  © 2018